Since I had those very scary attacks the last couple of weeks, the doctors decided that I couldn’t get that specific chemo anymore. That fact on itself is rather important because it means they have to go search for another kind of chemo that has the same effects in my body. My treatment isn’t over yet so it is important to have that chemo replaced by another one. Luckily the doctors told me that other kinds of chemo exist but they are all sort of part of the same ‘family’. Because of that I had to go through some allergic tests in order to avoid having the same allergic reaction the next time that I get a chemo treatment. And I assure you, I do not want that to happen again!! But the chemo is my medicine.

So today I had an appointment in the hospital to have some allergic tests. Again something new that I hadn’t experienced yet. It made me a bit nervous. I actually didn’t think I was nervous until I noticed that I had already run to the toilet three times in half an hour. My stepdad came to pick me up and accompanied me during the whole process of testing. The nurse really explained everything very well. I told her that I am not a brave women and I am afraid of needles. She didn’t really believe me. 🙂 But the truth is, I am actually a real chicken shit. I am very often scared of things but I am a brave chicken shit. That means that although I am scared, I try to find the courage to go through with it. Same in this case, but it wasn’t really scary. I actually felt nothing of those needles.

So the doctor took the tests. In order to know what chemo my body accepts he had to inject into my forearm, the one that made me react last week and three other chemos. He started with a little drup and then augmented the dose three times. Between every series we had to wait fifteen minutes for the result on my arm. The moment he injected the first one, it immediately became red and itchy. The rest went very well until the very last injection (the little brother of the bad chemo) also reacted. I thanked  the doctor for making me look like a drug addict. 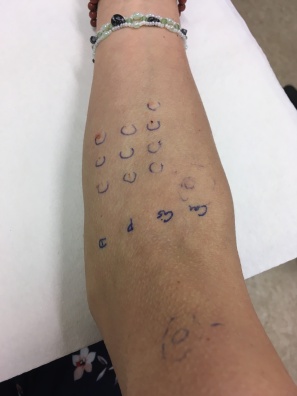 He decided that the little chemo brother would be the one that he will propose to my professor to continue with.

So the next five weeks I will have to stay two nights in the hospital every week. Not my most favorite place anymore. I assure you that the couch and your own bed are heaven compared to crying, coughing or old ladies that listen the panpipes when there sad. But what needs to be done has to be done! The reason for that two nights stay is that I have to receive the chemo in a special schedule. Like the last time but then even slower. And it needs to be followed up closely by the doctors. Yes, another tactic for the last five times that I have to receive chemo. THE COUNTDOWN! Let’s hope my body stays strong and accepts the chemo because I am already dreaming of tropical beaches, cocktails and other nice things!! 🙂

1 thought on “The new tactic”